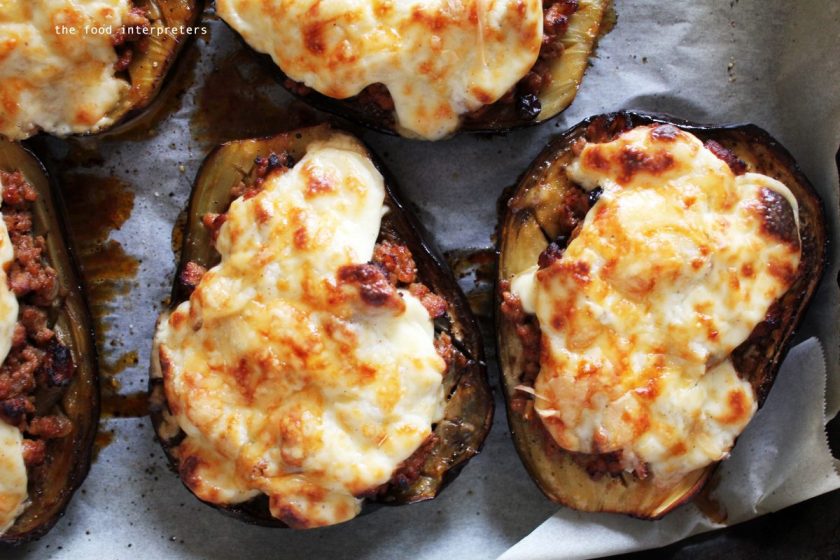 Small shoes (papoutsakia) is a somehow weird name for a food. There are many variations of aubergines-topped-with-something. The greek standard is with traditional béchamel, but we prefer this topping, according to the recipe of Aglaia Kremezi’s greek yogurt béchamel.  The rest is our family’s interpretation. 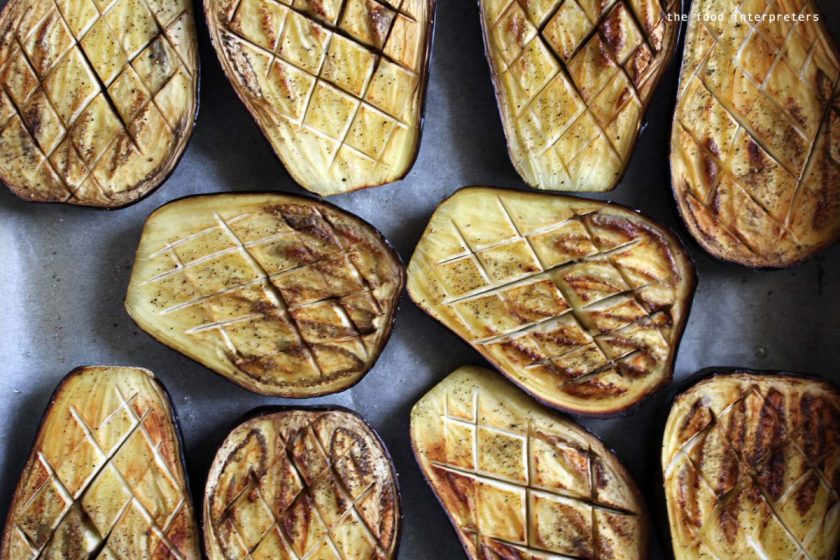 Preheat the oven to 180ºC (fan)  and line a baking tray with baking parchment.

Cut the eggplants in half, lengthwise. Score the flesh in a crisscross manner all over, using a sharp knife. Brush them with olive oil and season with salt and pepper.Place the eggplants cut side up in the prepared baking tray. Bake for 30-40 minutes until cooked through and golden brown and set aside.

In the meantime prepare the meat sauce. Place a large pan on medium heat with 2 Tbsp of the olive oil and cook the onions for about 7 minutes, add the garlic and cook for 2 more minutes stirring regularly. Add meat, breaking it into small pieces with a wooden spoon, cook, stirring occasionally, until browned, about 10 minutes. Deglaze with the red wine and wait 1-2 minutes to evaporate. Stir in the tomatoes, the sugar (if using), the remaining olive oil,the raisins (if using), a pinch of ground allspice and season with salt and freshly ground black pepper. Bring to the boil, turn the heat down and simmer covered for about 40-50 minutes, until most of the juices have evaporated.

For the greek yogurt béchamel whisk the olive oil and the cornflour together in a saucepan over medium heat until the mixture starts to froth, for about one minute. Remove from the heat and whisk for 2-3 minutes. Add the milk whisking constantly and then the yogurt.Cook over moderate heat, whisking constantly, and don’t worry if the mixture looks curdled,it’ll smooth out once it is boiled and thickened. Add the nutmeg, 1/2 cup of the grated gruyère cheese, sea salt to taste and continue to stir until the sauce thickens. Set aside.

Now it’s time to put it all together.

press with the back of a spoon

Press the baked eggplants with the back of a spoon to make room for the filling. Spoon the meat mixture equally between eggplant halves, pressing in firmly. Top with the greek yogurt béchamel sauce and sprinkle with the remaining gruyère cheese.

Bake in the pre-heated oven for about 30-40 minutes until golden brown.

Allow to cool a little before serving.