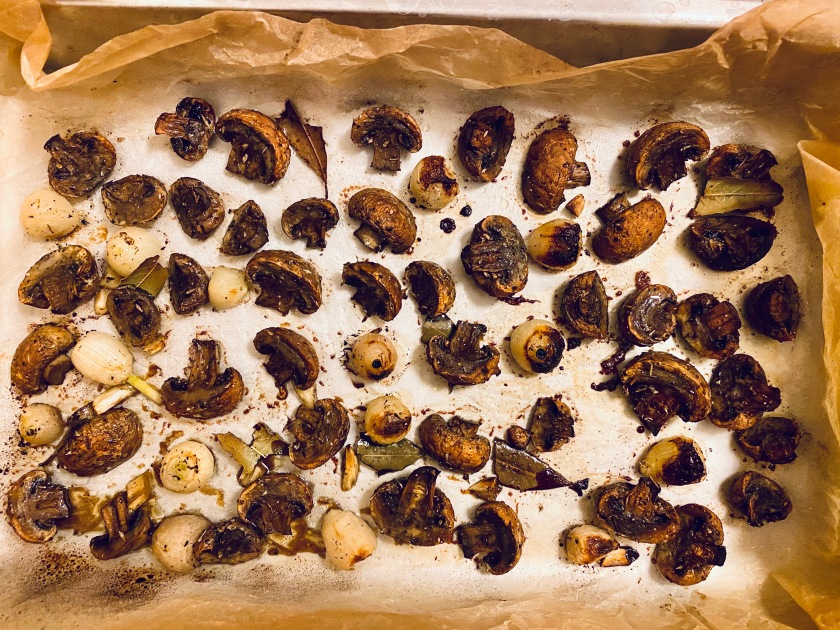 There are no mushrooms in the famous painting  ‘The Fairy Feller’s Master-Stroke’ of the Victorian lunatic Richard Dadd. Given the connotations of mushrooms and their place in folkore or in other Victorians’ eccentric writings, this is somehow unexpected. But we can think that something even stranger happened after the Fairy Feller stroke the chestnut. All  the chestnuts – not just the one he masterly smashed- turned into mushrooms. They spread uniformly like a hypothetical constellation defying the rules of gravity and space-time. Of course they could not be put to use for the construction of Queens Mab’s carriage ( have you ever heard of a carriage made of mushrooms?), so we roasted them with onions.

Queen Mab aside, this makes a great sidedish or – with the addition of some more greens – a good salad.

Serves 4 as a side-dish

In a large bowl mix the halved mushrooms, whole shallots, rosemary, garlic, 3 Tbsp of the olive oil and season with 1/2 tsp of salt and a generous amount of freshly ground black pepper.

Transfer to a parchment-lined rimmed baking tray and spread into an even layer and roast for about 25 minutes until caramelised and soft. Remove from the oven and let them cool for about 5 minutes.

Transfer to a shallow bowl and toss with the rocket, the remaining 2 Tbsp of olive oil and the lemon juice. Season with some more salt and pepper if needed.