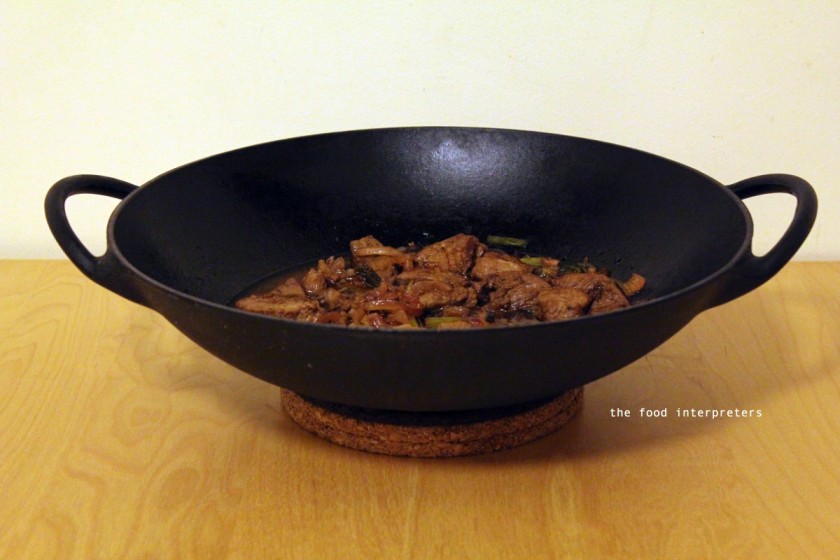 The Ferry building is an iconic San Francisco landmark, featuring in movies set at least 300 years apart – from “The Maltese Falcon” in 1941 to “ Star Trek, Into Darkness” in 2259.  It is there where the “Slanted Door” is located – facing the amazing SF Bay  – and not in Little Saigon next to Chinatown of Polanski fame. Silicon Valley talents along more artistic crowds queue to taste the modern Vietnamese cuisine of chef Charles Phan.

‘Shaking beef’ (Thit bo luc lac) is one of his most popular dishes. It is traditional Vietnamese celebratory food adapted for western jaws. The tough beef cuts have been replaced by tender fillet mignons. “Luc lac” means shaking and refers to the tossing of the beef (thit bo) in the wok while cooking. It is simple to cook and very tasty.

The recipe that follows is an adapted version from the eponymous “The Slanted Door, modern Vietnamese food” . Serves 4.

For the dipping sauce

In a large mixing bowl whisk together 1 Tbsp of the oil, 1 tsp of the sugar and the salt and pepper until well combined. Add the cubed beef, toss to combine and let marinate for 2 hours.

In another bowl, combine the rice vinegar, mirin, light and dark soy sauces, fish sauce and 1 Tbsp sugar, until the sugar has dissolved.

Heat a wok over high heat. Add 2 Tbsp of the oil to the wok and heat until shimmering, but not smoking. Add half of the beef in a single layer and sear until a brown crust forms on the bottom side, for about 3 minutes.

Flip the beef over to brown the other side, for about 1 minute.

Add half of each green onions and red onions and cook stirring for 30 seconds. Add half the soy sauce mixture and shake the pan to coat the beef. Add half each of garlic and butter and continue to shake the wok until butter is melted and equally distributed.

Remove the meat and onions from the wok, transfer to a bowl and keep warm.

Wipe the wok clean and return to high heat. Repeat with the remaining half of the ingredients.

When ready to serve arrange the salad on a platter and spoon hot beef and onions on top making sure to drizzle some of the beef juices over the salad as well.

To prepare the dipping sauce, stir together the lime juice, salt and pepper in a small ramekin.

Serve the shaking beef with the dipping sauce.