Some time ago we decided to cook the traditional moroccan bastilla. We tried out several versions, and in a while  drifted away to our version of chicken pie. We cooked it with dates or sultanas, with chicken livers or not, with hard boiled eggs or scrambled in chicken stock, almonds or pine-nuts – depending on what we had in the fridge and pantry. We settled on the following recipe, for individual or bigger pies. It references to the original moroccan pie in the sense that we kept the sugar and cinnamon on top.

This is a simple but time-consuming recipe and everybody loves it. Makes 6 individual pies 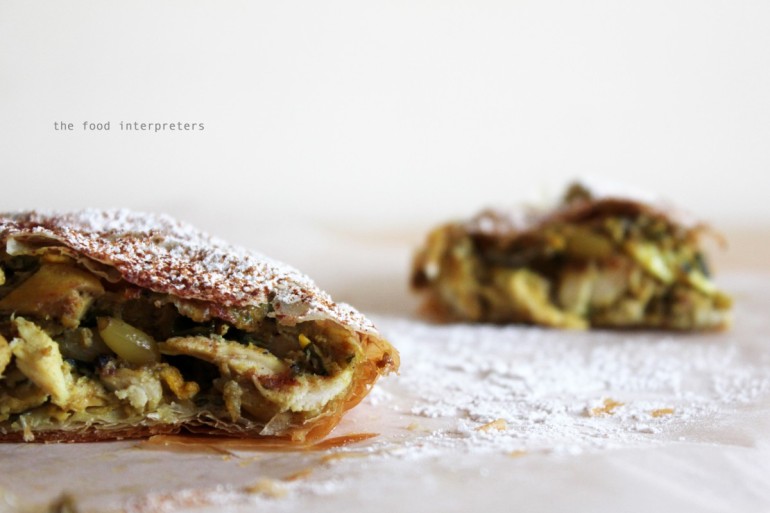 Heat the oil in a heavy large saucepan over medium heat. Add the onion and cook stirring regularly for about 5-8 minutes, until it is soft and lightly golden. Mix in cinnamon, nutmeg, turmeric, mace and saffron and stir well for about 1 minute.

Add the chicken and cook, stirring for 2-3 minutes. Add the warm chicken stock or water and gently simmer uncovered for about 40 minutes or until the thigh meat is falling away from the bone. Stir in the dates and allow to cool down in the stock until chicken is cool enough to handle.

Strain through a sieve and pour the strained stock back into the pan. Take out the chicken,remove and discard the skin and bones and shred the meat into large pieces. Mix the chicken meat with the onions and set aside.

Meanwhile, bring the strained stock to the boil, until it has reduced to about 150ml. Reduce the heat and stir the beaten eggs into the hot liquid. It will look curdled, but don’t worry. Simmer for 5 mins, stirring constantly.Remove the saucepan from heat and pour the egg mixture into a coarse sieve set over a bowl. Let mixture drain undisturbed 10 minutes before discarding any liquid.

Toast the pine nuts in a large frying pan over a medium heat until golden brown (not burnt!).

Transfer the egg mixture into a bowl. Stir in the chicken and onion mixture, the toasted pine nuts, parsley and coriander. Add the honey and give everything a good mix. Season generously with salt and black pepper. Filling may be made 1 day ahead and kept chilled, covered.

Divide the filling into six portions.

Cut the filo sheets in half crosswise. On a work surface arrange the first half sheet of filo and brush it with the melted butter. Place the second half on top to create a star shape (more or less) and brush it with butter. Arrange one portion of the filling in the centre and pat it down to form a disc. Bring the points of the filo in towards the centre, brushing each one with the melted butter, to create a round pie.

Turn the pie over and place it on the prepared baking tray. Repeat with the remaining filo sheets and filling to create five more pies. Brush the tops and sides of the pies with melted butter and bake for about 20 minutes, until golden brown. Dust with icing sugar and cinnamon and serve immediately.